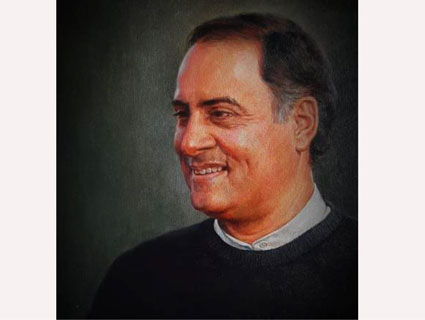 “India is an Old country but a young nation…I am young and I too have a dream, I dream of India Strong, Independent, Self-Reliant and in the front rank of the nations of the world, in the service of mankind.” –Rajiv Gandhi

Rajiv Gandhi was born on the 20th of August 1944, to Smt. Indira Gandhi and Shri Feroze Gandhi, in Bombay. He spent his childhood with his grandfather, Prime Minister Pandit Jawaharlal Nehru. After completing his schooling from Doon School, he went to Trinity College, Cambridge, and then to Imperial College London, to study Mechanical Engineering. From there he went on to pursue his lifelong passion of flying. He trained and obtained a Commercial Pilot’s Licence and became a pilot with Indian Airlines.

His brother, Sanjay Gandhi’s untimely death, jolted his world and brought him to the altar of Indian Political scene. His tenure as the General Secretary of Congress reflected his quiet efficiency, coordination skills, and sincere commitment. At the age of 40, he became the youngest Prime Minister of India, in a landslide victory with the largest majority in the history of the Indian Parliament. As Prime Minister he laid the foundations of a modern India.

A champion of strong local self governance his efforts bestowed upon the country the gift of 73rd constitutional amendment which transformed the largest democracy of the world into the most representative one. As the architect of digital India, his resolve on the development of state-of-the-art telecommunication and information technology was reflected in the establishment of C-DOT, MTNL, VSNL, and in the countrywide mesh of Public Call Offices.

A firm believer in the magnanimous power of education as the great equaliser in the society, and in its monumental importance in preparing India for a new century, he announced in 1986, the New National Policy on Education (NPE) to modernise and expand higher education programmes; established residential schools called Jawahar Navodaya Vidyalayas to carry the opportunity of good-quality formal education to even the most far-flung and inaccessible corners of India, and to bring out the best of the rural talent; launched Operation Blackboard to improve the educational infrastructure in primary schools and opened Indira Gandhi National Open University (IGNOU), as a tool to provide the opportunities of higher education to all the segments of society in the distance and open learning mode for pan-India accessibility, and to promote adult education.

Being a young leader himself, Rajiv Gandhi sought to empower the youths. In 1989 his government brought and got passed the 61st Amendment Act of the Constitution, lowering the age for exercising the franchise from 21 years to 18 years. This reduction in the voting age allowed the youth a greater say in choosing their representatives. A true patriot and the pioneer of national integration, he brought peace to Assam, Tripura and Arunachal Pradesh, states long burning in the fires of ethnic tension, and strengthened the ailing relations with Punjab.

His pragmatic willingness to hear out and reflect upon varied political and social point of views and philosophies, and the capability to navigate wisely across the historical emotional inclinations to reach at practical solutions of modern day national and international issues, prompted him to evolve his personal diplomatic style and innovate sensibly in the domain of India’s foreign policy. Besides further strengthening the historical ties with Soviet Union, he also with a reasoned approach and an appreciation for technological advancement, opened towards the West.

In his policy towards the neighbouring nations he favoured friendly, cordial and mutually elevating relationship. His swift decision to offer military and intelligence support to the Presidency of Republic of Maldives, destabilised by a series of coup d’état attempts in 1980s, helped successfully eliminate the threats of coup and restored order in Male.

To commemorate the 76th birth anniversary of the legend, IICD on August 20th, 2020, in collaboration with Department of Science and Technology, Government of Rajasthan and Jawahar Kala Kendra organised a small series of events. The programme which enlisted the participation of various colleges from across the state was inaugurated by the honourable Chief Minister of Rajasthan, Shri Ashok Gehlot. 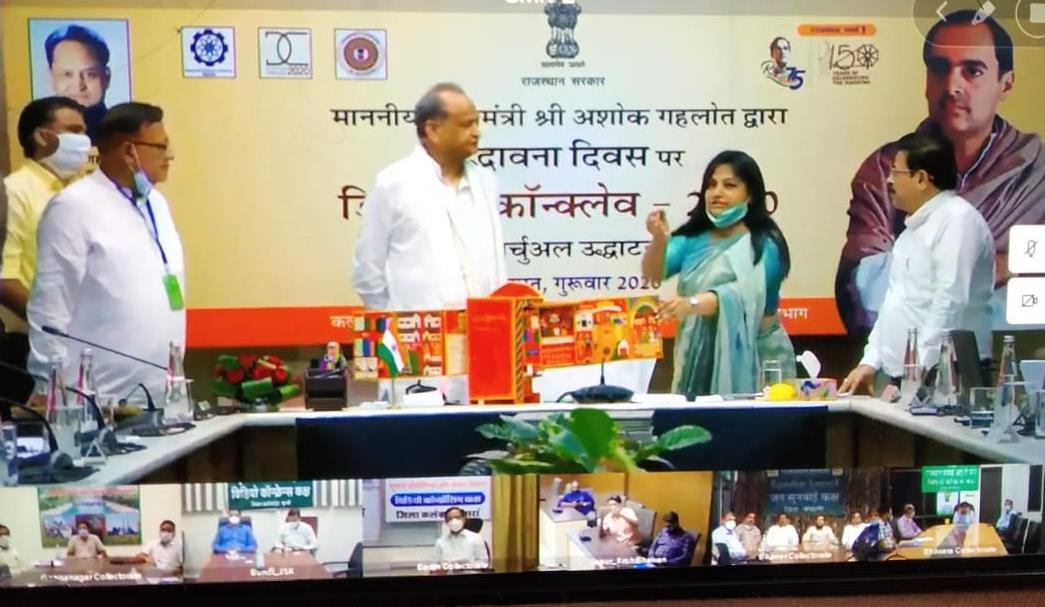 Being an Institute of craft and design, IICD breathes the mandate of preservation and promotion of crafts and craftsperson. Holding true to its core, it paid tribute to Rajiv Gandhi’s visionary policies, progressive thought and his love for the people of India and their democratic rights, through a harmonious amalgamation of two beloved crafts of Rajasthan and their skilled artisans.

The colourful picturesque narratives of Kawad, a craft from Bassi, brought alive his life’s labours in strengthening local self governance as an indispensible constituent of a truly representative democracy, which culminated in the form of the constitutionalisation of a three tier Panchayati Raj with a reserved political representation for women for the first time in the history of nation, ensuring women empowerment in more than just words. Offering a glimpse into the then newly laid dense network of PCOs across the length and width of the country, travelling along the ragged trails of remotest of Indian villages and the smoothest of urban routes, stealing a glance into the recently globalised dwellings of late 80’s resonating with the voices and interfaces from home and abroad, the lively characters of Kawad also took the spectators on a journey of the Information Technology and Telecommunication revolution ushered by Mr. Rajiv Gandhi. 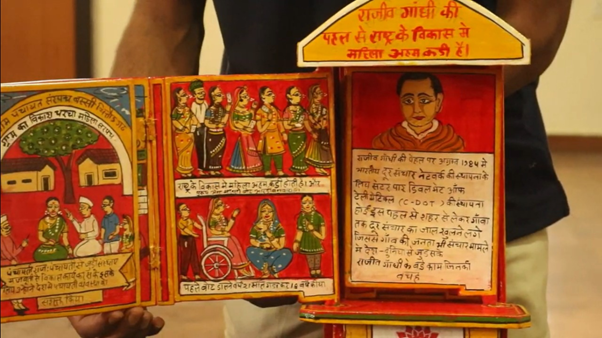 He once said, “India missed the Industrial Revolution; it cannot afford to miss the Computer Revolution”. With this motto he worked hard towards making computerization a reality in a developing India. The vibrant, interactive Kathputlis of Rajasthan, through their simple yet communicative gestures and language sung the story of his unflinching efforts in heralding the dawn of computer age on the horizon of India’s growth. On this joyous occasion IICD faculty and an artist of unique capabilities, Mr. Shuvankar Biswas successfully organised a three day workshop on portrait painting with a wide participation. 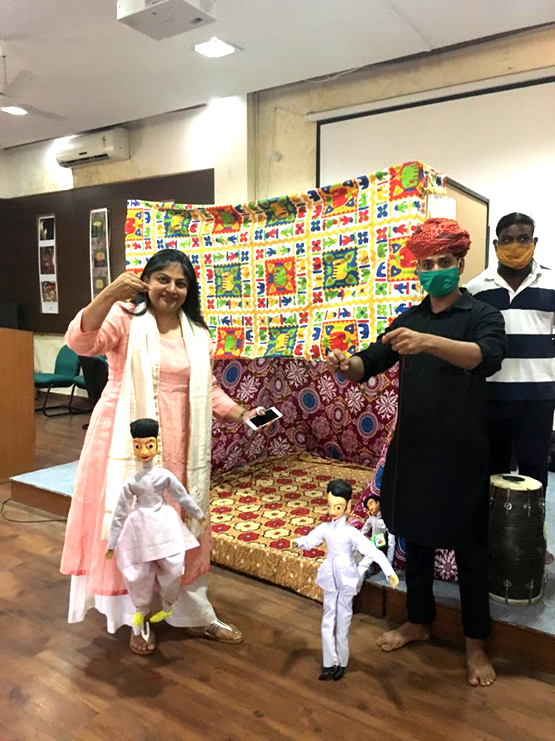 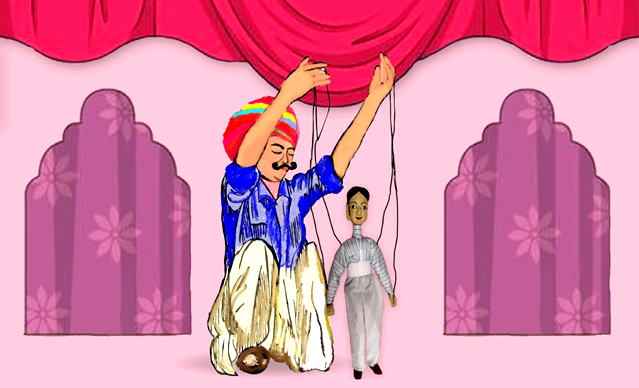 Rajiv Gandhi was a visionary, both in his understanding of politics and its purpose; and of society and its significance. He understood the strengths and weaknesses of Indian society and polity, and worked throughout his career towards the alignment of political will with the needs of the people and their empowerment. In the short span of his political career he made an unforgettable mark on the soul of Indian democracy.

The entire programme was aired for public through online platforms in the wake of the prohibitions imbibed to contain the spread of covid-19 pandemic. It was an event studded with the fond reminiscences of a man who mirrored the simplistic persona and day to day aspirations of the country’s middle class. It was a loving remembrance of a man who knew that the real India lived in its many thousand villages, who knew that the country rested firmly on a million strong shoulders of its benevolent farmers and was ardently hand-crafted by its billion rural hands. It was homage to the man who understood that the largest democracy of the world could never be realised without representation of these millions, without ‘power to people’. Living the active conscience of every Indian hamlet in his passionate heart he shared their rightful dreams, and worked earnestly for their fruition. It was a humble tribute to the progressive champion of a modern, educated, aware nation in making, who rode the wings of scientific temper and catapulted India with careful compassion into the 21st century.

His thoughts, actions and initiatives will continue to guide the countrymen to strive for an egalitarian existence and a modern outlook. We remember him with boundless warmth on his 76th birth anniversary! 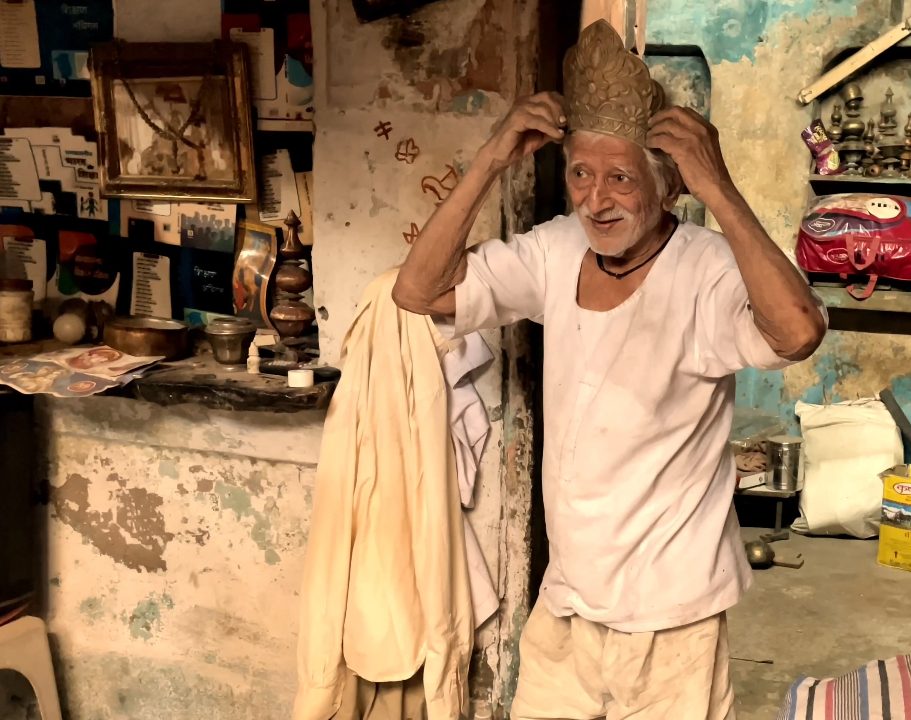 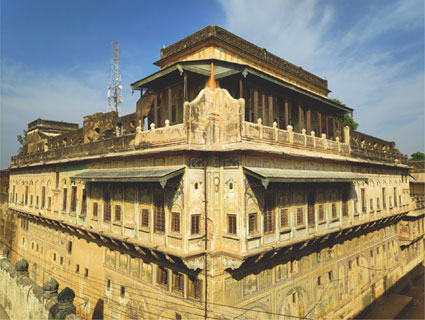